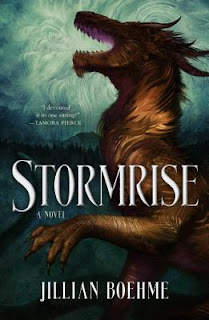 Those of you who are regular readers of this blog will know I rarely read fantasy.  But I received an ARC of this book from Tor Teen in exchange for an honest review, so I sat down and read the whole thing in a single day.

Stormrise is about a young woman called Rain.  Her father has trained her to be a fierce Neshu warrior despite the fact that as a girl her future is to be married off to a stranger in exchange for a dowry.

When the country is invaded and the king calls for one man from every family to join the army, rather than allowing her disabled twin brother to join and no doubt be killed, Rain runs away and joins up under his name.

Her Neshu training quickly makes her stand out and she is selected to join an elite Neshu fighting group.  Each day she is forced to prove herself to the men in her team, all the while finding new and cunning ways to disguise her identity as a girl.

Before leaving for the army, Rain visited a strange apothecary and was given a powder made from dragon parts that would keep her menses away.  Unfortunately one of the potion's side affects is that she hears the voices of dragons, long believed to be extinct or a thing of legend, calling to her in her head.

When the voices tell her the war will be lost unless the dragons are awoken, Rain must decide whether she believes in dragons, and if she can trust these dangerous beasts with the lives and land she loves.

There is a lot to enjoy in this book.  Rain is a feisty, determined heroine, but not a thoughtful one.  I was surprised at the speed with which she decided to leave home and pose as a man to join the army when in her land such a thing is a crime, punishable by death.  In many circumstances she acted impulsively, not giving the situations the consideration they probably deserved.  Especially when she is also hiding the fact she is a girl.

There is also surprisingly little world-building for a fantasy novel.  I never felt like I didn't understand the world the book is set in, but there was very little description to make the setting vivid and alive.

I enjoyed this book as something of a change from what I usually tend to read, but didn't find it very different from most other fantasy books I've read over the years.  Which is why I don't really read fantasy books and probably won't read another one for a few years.

A combat warrior will risk everything to awaken the dragons and save her kingdom in Jillian Boehme's epic YA Fantasy debut, Stormrise, inspired by Twelfth Night and perfect for fans of Tamora Pierce.

If Rain weren’t a girl, she would be respected as a Neshu combat master. Instead, her gender dooms her to a colorless future. When an army of nomads invades her kingdom, and a draft forces every household to send one man to fight, Rain takes her chance to seize the life she wants.

Knowing she’ll be killed if she’s discovered, Rain purchases powder made from dragon magic that enables her to disguise herself as a boy. Then she hurries to the war camps, where she excels in her training—and wrestles with the voice that has taken shape inside her head. The voice of a dragon she never truly believed existed.

As war looms and Rain is enlisted into an elite, secret unit tasked with rescuing the High King, she begins to realize this dragon tincture may hold the key to her kingdom’s victory. For the dragons that once guarded her land have slumbered for centuries . . . and someone must awaken them to fight once more.
Posted by Kate Larkindale at 11:32 AM