Books I've Loved: I Crawl Through It 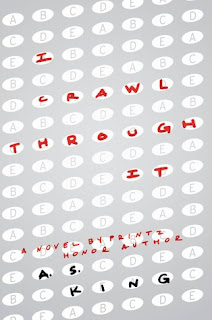 I read this over the weekend and finished it in about three hours.  At the end, I had no idea what I'd read, just that I loved it.

This has to be one of the weirdest books I've read in a long time.  The characters are odd.  Their situations are odd, yet underlying all that is a sense that reality is there, just a tiny bit off kilter.

All the characters are dealing with things bigger than they are and the odd ways they express themselves or show their damage (or hide it) are part of their ways of coping with these big, life-changing events.  They could be seen as metaphoric - I don't think China really turns herself inside out so she's nothing more than a walking anus - that's just how she feels at the time.

For much of the book I just read, riding the prose and waiting for a moment when everything became clear to me.  And that did happen.  Toward the end reality crashes in and it becomes clear what each of these characters has been through.  It's possible then to understand why they have chosen to react the way they do.

I think what I liked most about the book is that the characters are smart.  Unashamedly smart.  But they're not nerds or geeks the way smart kids are often portrayed in books.  They're normal, smart kids with problems.

This won't be for everyone.  It's twisted and strange and surreal, but if you're willing to go with it, I think you'll enjoy it.

Four talented teenagers are traumatized-coping with grief, surviving trauma, facing the anxiety of standardized tests and the neglect of self-absorbed adults—and they'll do anything to escape the pressure. They'll even build an invisible helicopter, to fly far away to a place where everyone will understand them... until they learn the only way to escape reality is to fly right into it.
Posted by Kate Larkindale at 9:35 AM