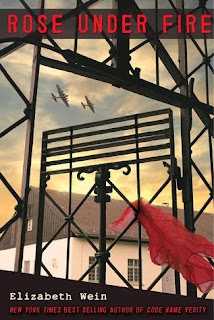 A few years back everyone was talking about this book called Code Name Verity.  It was about a girl pilot during WWII who was captured.  I read it, enjoyed it, but didn't quite get why it was getting the rave reviews everyone seemed to be piling on it.

Then I found this follow-up book and in my humble opinion, this is the one that should have got rapturous reviews.

It's not an easy book to read.  Set in a WWII concentration camp, Rose is subjected to some of the most inhumane treatment anyone could ever endure.  Her fellow prisoners are abused and mistreated horribly.  But what a group of women she's in with.  Every character is unique and fascinating and strong.  And when they can't be strong, the rest of the group are strong for them.

This is a book that really delves into the resilience of the human spirit.  It shows how even a tiny shred of hope can be enough to let someone survive the worst indignities known to man.  And it shows the lengths people will go to to help one another.

I was sucked wholly into this world, horrible as it was.  And I couldn't put the book down until I knew the fate of every woman in Rose's cabin.

If you don't believe me, here's the blurb…

While flying an Allied fighter plane from Paris to England, American ATA pilot and amateur poet, Rose Justice, is captured by the Nazis and sent to Ravensbrück, the notorious women's concentration camp. Trapped in horrific circumstances, Rose finds hope in the impossible through the loyalty, bravery and friendship of her fellow prisoners. But will that be enough to endure the fate that's in store for her?Elizabeth Wein, author of the critically-acclaimed and best-selling Code Name Verity, delivers another stunning WWII thriller. The unforgettable story of Rose Justice is forged from heart-wrenching courage, resolve, and the slim, bright chance of survival.
Posted by Kate Larkindale at 2:36 AM