Books I've loved: The Revolution of Marina M. and Chimes of a Lost Cathedral 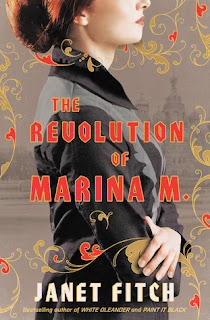 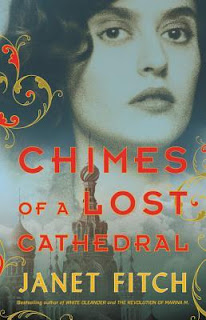 I did a lot of reading while on holiday last week, and for some reason, historical fiction seemed to be the uniting theme of much of what I read.  And these two books were two of the highlights for me in that trend.

I read White Oleander years ago and became a fierce fan of Janet Fitch because she wrote so beautifully, but still managed to tell an engaging and emotionally gripping story.  I fell a little out of love with her when I read her second book, Paint it Black, because I really didn't enjoy it.  But when I saw these two books on the shelf at the library, I picked them up and decided I'd give Janet another chance.

And boy am I glad I did!

These two books take place over a period of only about 5 years - from 1916 to 1921.  Set in St. Petersburg (then known as Petrograd) the two books follow the title character, Marina, through some of the most tumultuous years of Russian history.

Marina is 16 when we fist encounter her, privileged, wealthy and just beginning to push against the boundaries that are holding her in childhood instead of allowing her to grow up.  A burgeoning young poet, Marina is certain the world has more to offer her than the genteel life she's lived up until now.  A radical new school friend introduces her to the world of striking workers and a rascally friend of her older brother introduces her to the joys of sex.

As her country faces radical change, and with it, tremendous upheaval, Marina finds herself in opposition with her family, her friends and even her lovers as she struggles to discover who she is and what she wants in a world that is changing each and every day.

These books are clearly well researched.  Real historical figures march through its pages with authority, as well drawn as the fictional characters being followed.  Marina is a headstrong, often thoughtless young guide through this new world.  Having grown up getting everything she wants, watching her learn how to live in a new reality where no one has anything is fascinating.

This is a period of history I already knew quite a bit about (I studied Russian history and literature at university alongside film), but seeing it unfold through the eyes of one character brought the hardship, the idealism and the reasons why the revolution had to happen starkly to life.  It also shows the role art played in forcing change.  Marina's role as a poet sustains her through the trials she suffers.  As long as she can keep articulating her experiences in poetry, she will survive.

I'd definitely recommend these books.  At over 1,000 pages between them, they're not a quick and easy read, but they are both fascinating and engaging.  And you might even learn something about a period in history you may not ever have explored before.

But don't just listen to me. Here are the blurbs:


From the mega-bestselling author of White Oleander and Paint It Black, a sweeping historical saga of the Russian Revolution, as seen through the eyes of one young woman.

St. Petersburg, New Year's Eve, 1916. Marina Makarova is a young woman of privilege who aches to break free of the constraints of her genteel life, a life about to be violently upended by the vast forces of history. Swept up on these tides, Marina will join the marches for workers' rights, fall in love with a radical young poet, and betray everything she holds dear, before being betrayed in turn.

As her country goes through almost unimaginable upheaval, Marina's own coming-of-age unfolds, marked by deep passion and devastating loss, and the private heroism of an ordinary woman living through extraordinary times. This is the epic, mesmerizing story of one indomitable woman's journey through some of the most dramatic events of the last century.


The story of THE REVOLUTION OF MARINA M. continues in bestselling author Janet Fitch's sweeping epic about a young woman's coming into her own against the backdrop of the Russian Revolution.

After the events of The Revolution of Marina M., the young Marina Makarova finds herself on her own amid the devastation of the Russian Civil War -- pregnant and adrift in the Russian countryside, forced onto her own resourcefulness to find a place to wait out the birth of her child. She finds new strength and self-reliance to fortify her in her sojourn, and to prepare her for the hardships and dilemmas still to come.

When she finally returns to Petrograd, the city almost unrecognizable after two years of revolution, the haunted, half-emptied, starving Capital of Once Had Been, she finds the streets teeming with homeless children, victims of war. Now fully a woman, she takes on the challenge of caring for these Civil War orphans, until they become the tool of tragedy from an unexpected direction.

But despite the ordeal of war and revolution, betrayal and privation and unimaginable loss, Marina at last emerges as the poet she was always meant to be.

Chimes of a Lost Cathedral finishes the epic story of Marina's journey through some of the most dramatic events of the last century -- as a woman and an artist, entering her full power, passion and creativity just as her revolution reveals its true direction for the future.
Posted by Kate Larkindale at 12:30 AM