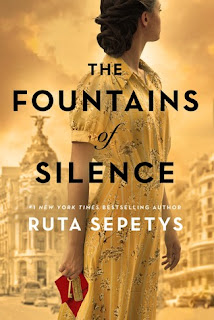 Continuing the historical fiction theme, this books set during the Franco dictatorship in Spain at a time when Franco realized that he needed to open the doors of his country to the world if it was going to thrive.  A fancy hotel is built to contain the foreigners and much of this book is set in and around this hub for the expatriate community.

The main characters are Ana, a housemaid at the hotel who is desperate to keep the job so she can help support her family which has been torn apart by the regime, and Daniel, the son of a Texas oil tycoon.  Daniel's mother is Spanish and she has insisted that he spend his summer before college getting in touch with his roots.  His father is busy doing a business deal in Spain, so Daniel is left largely alone to explore Madrid with his beloved camera.

But some of the things Daniel sees and captures through his lens make him uncomfortable.  He doesn't understand them.  Nor does he understand Ana's unwillingness to talk to him about her country and what makes it tick as it struggles to shake off the shadows of the Spanish Civil War.

While I picked this book up in the YA section of the library, I wouldn't call it strictly a YA book.  The two main protagonists are young, but during the course of the book they grow up into their thirties or forties, and there are many other central characters who are adults.  Not that I minded that at all.

While much of the book follows the growing romance between Ana and Daniel, there is a deeply woven subplot about an orphanage and the sale of babies to wealthy parents-to-be.  There is also another subplot around bull fighting and the system for joining the exalted ranks of these 'heroes'.  And all of this plays out under the oppressive cloud of Franco's dictatorship and the fear it has generated amongst the Spanish people.

Well researched, fast-paced and engrossing, I read this in a single day, unable to put it down once I started it.  In between chapters are excerpts from government documents, media of the time and conversations with people were there at the time to support the events that have just taken place.

This is not a period of history I know a lot about, so this insight into the way people were forced to live during this time, and the ways they survived and thrived were fascinating.  I'd definitely recommend this one to anyone who would like a way into this period and the role it played in creating the Spain of today.

A portrait of love, silence, and secrets under a Spanish dictatorship.

Madrid, 1957. Under the fascist dictatorship of General Francisco Franco, Spain is hiding a dark secret. Meanwhile, tourists and foreign businessmen flood into Spain under the welcoming promise of sunshine and wine. Among them is eighteen-year-old Daniel Matheson, the son of an oil tycoon, who arrives in Madrid with his parents hoping to connect with the country of his mother's birth through the lens of his camera. Photography--and fate--introduce him to Ana, whose family's interweaving obstacles reveal the lingering grasp of the Spanish Civil War--as well as chilling definitions of fortune and fear. Daniel's photographs leave him with uncomfortable questions amidst shadows of danger. He is backed into a corner of difficult decisions to protect those he loves. Lives and hearts collide, revealing an incredibly dark side to the sunny Spanish city.