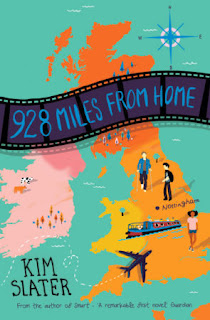 This book turned out to be pitched much younger than most of the books I read, but I still enjoyed it to a degree.

Set in Nottingham, Calum lives on one of those grim English housing estates that are a staple in films by people like Ken Loach and Mike Leigh.  His dad is away a lot, doing something that sounds barely legal, leaving  Calum home alone for much of the week.  It's no wonder Calum has big dreams, ones that take him away from this drab, boring existence.  So when a local arts center offers a screenwriting contest, Calum is instantly intrigued.

But screenwriting isn't something Calum can talk about with his mates at school.  And keeping tight with these guys is becoming harder and harder as they bully anyone they see as different and spout loud opinions about outsiders and immigrants.

When Calum's dad moves his new Polish girlfriend and her son into the flat, everything changes for Calum.  Suddenly he's living with an immigrant, and outsider, and how is he going to explain that to his friends.  Especially since Sergei has been the focus of their bullying since he arrived at school.

But after Calum is the victim of a hit-and-run at the start of the summer holidays, he and Sergei find themselves thrown together and Calum, who was badly injured in the accident, is forced to rely on him.  As they begin to understand one another, a tentative friendship begins to grow.

Yet even as they begin to open up to one another, Calum can't help feeling like Sergei is keeping something from him.  And when he discovers Sergei's secret, it's something he would never have expected.

I liked how authentic this book felt in terms of the world Calum resides in and the struggle he has just to keep living.  Poverty and neglect aren't sexy and they are presented here in a really raw and realistic way.  Calum's loneliness and the way he keeps himself hidden so no one will discover how much time he spends alone is very true to kids who find themselves in this situation.  His resourcefulness when it comes to scrounging up food for himself once what his father left for him is gone also feels very real.

Throughout the book we get little snippets of screenplays he's writing, usually in head rather than on paper.  These are naive, but again feel real to Calum's experience (or lack of it) and the difficult lessons he's learning about life as he navigates his way through it.

But don't just listen to me.  here's the blurb:

For now though, he’s stuck coping alone while his dad works away, writing scripts in his head and trying to stay ‘in’ with his gang of mates at school, who don’t like new kids, especially foreign ones.

But when his father invites his new Polish girlfriend and her son, Sergei, to move in, Calum’s life is turned upside down. He’s actually sharing a room with ‘the enemy’! How’s he going to explain that to his mates?

Yet when Calum is knocked down in a hit and run and badly injures his leg, everything changes. Trapped at home, Calum and Sergei slowly start to understand each other, and even work together to investigate a series of break-ins at the local community centre.

But Calum can’t help feeling like Sergei’s hiding something. Is he really trying to help, or cover up his own involvement in the crime?
Posted by Kate Larkindale at 12:30 AM