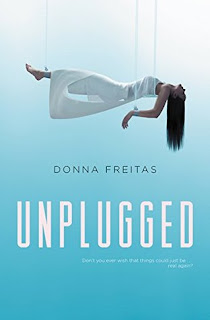 Once again I've found myself reading a book that is the first part of a series without meaning to.  I've always enjoyed Donna Freitas's books, so I picked this up even though the description didn't really sound like the kind of thing I usually enjoy.  Having been in kind of a slump where I haven't liked a lot of the books I've read much, I figured maybe getting out of my comfort zone might be a good idea.

Unplugged is set in a future where many of the population have given up on the real world and moved entirely into a virtual world known as the App World.  Skylar is one of the lower class citizens in App World because she's a single - someone who has been plugged in by her family who remain in the real world.  Sky hasn't forgotten her real family and can't wait until she turns 17 and can do 'service' in the real world.

But then the leaders of App World announce that political unrest has closed the borders between the two worlds and 'service' is cancelled.  Most people rejoice, but Sky is devastated that she won't see her family again. This is further compounded when 'the cure' is announced - a way people can do away with the physical bodies being cared for in the real world and keep living in App World.

Desperate to see her family, Sky agrees to take part in a dangerous mission that will see her illegally unplugged.  But what she finds in the real world isn't what she expects, and she is soon embroilled in even more complex political machinations than the ones she saw in the App World.

I kind of enjoyed this book.  The idea of living your whole life virtually intrigues and sort of horrifies me.  The way it was described in this book made me wonder about the point.  Everyone still went to school or work and sat down to eat virtual meals like a family.  Why?  Sure their video games were more immersive, but other than that and being able to dowload apps to make your appearance change, I couldn't understand why people would choose this world over reality.  Surely the benefits of a virtual world are that it's different to the real world.

I was also frustrated when I reached the last third of the story and realized it was going to be a series and wasn't going to wrap up.  So now I'll have to see if I can find the other parts so I can find out how the story ends.  And I bet they aren't available yet...

Now Skye is a nobody, a virtual sixteen-year-old girl without any glamorous effects or expensive downloads to make her stand out in the App World. Yet none of that matters to Skye. All she wants is a chance to unplug and see her mother and sister again.

But when the borders between worlds suddenly close, Skye loses that chance. Desperate to reach her family, Skye risks everything to get back to the physical world. Once she arrives, however, she discovers a much larger, darker reality than the one she remembers.
Posted by Kate Larkindale at 9:30 AM