I'm lucky enough to have the talented Heidi R. Kling joining me on the blog today to answer a few questions. Heidi has a new book out called WHERE I FOUND YOU.  Check out the cover! Isn't it pretty? 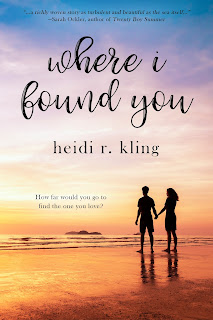 Heidi was kind enough to be interviewed about her book and her life, so here are her answers to my questions.

If you could swap places with one of your fictional characters for 24 hours, who would you choose to be? Why? And what would you do that day?

I’d probably swap places with Sienna in Aceh, because that experience is so rich and vivid and painful, it defined her. I’d also swap with Paige in Jackson Hole Wyoming with Jake in the cabin. :)

In what way is your story unique compared to other books in this genre?

WHERE I FOUND YOU is unique because it takes place after a natural disaster in Indonesia. I don’t think I’ve heard of another YA novel that takes place in Indonesia. We’re tackling culture shock, coming-of-age, first love and the aftermath of a devastating disaster all in the same novel. Another thing that makes it unique is the tone. While it deals with heavy material, it’s light in tone, which makes it accessible to everyone and a wide swath of ages, which is my goal.

What part of the story was the most fun to write? The most challenging?

I loved “aging up” Sienna. She was originally 15 in the novel Sea, and now in WHERE I FOUND YOU she is 17. There’s a new maturity there, and her age allowed me to deepen her relationship and her feelings for Deni.

Sienna. I don’t think I’m like Vera at all. My friends who read Sea said they can hear my voice in her narrative. We are a lot alike. I can’t deny that!

If you could have one superpower, what would it be and how would you use it?

Fly. Hands down. I would fly around. Mostly at night. Mostly over the sea.

Tell us something we’d be surprised to learn about you.

After spending 16 years in Palo Alto, we bought a house in a tiny town on the coast! Not unlike Sienna’s town.

What other interests do you have outside of writing?

Hanging out with my friends, family, kids. Watching TV. Hiking. Riding my beach cruiser on the coastal trail. Cooking. Eating. Living. My motto is: don’t write instead of live. If I’m spending more time in a fictional world than my real world, I shake things up. I’m fortunate to have a very full and fun life. I keep my calendar packed and am always on the lookout for the next fun thing to do.

Do you have a nervous habit when writing? A guilty pleasure when writing? (example: chew a pen to death or have a stack of Hershey’s kisses while you write)

I used to pound frozen dark chocolate peanut butter cups from Trader Joe’s, but we don’t have a Trader Joe’s nearby anymore so I have to suffer in silence.

:D Thanks for having me!

After her mother’s plane went missing over the Indian Ocean, seventeen-year-old Sienna Jones gave up everything she loved about living in California. No more surfing. No more swimming. No more ocean, period. Playing it safe, hiding from the world, is the best call.

Until her dad throws down the challenge of a lifetime: spend the summer with his humanitarian team in Indonesia, working with orphans who lost everything in a massive tsunami.

The day they arrive, Sienna meets a mysterious boy named Deni, whose dark, intense eyes make her heart race. Their stolen nights force her to open up and live in a way she thought she couldn’t anymore. When she’s with Deni, she remembers the girl she used to be…and starts to feel like the woman he sees in her.

A woman he wants for his own.

But when Deni’s past comes looking for him, Sienna’s faced with losing another person she loves. She can’t do it. Not again.

Fortunately, this time, she has a plan.

About the Author:
Heidi R. Kling writes about normal girls in fantastic situations. PAINT MY BODY RED, a romantic thriller about a girl fleeing secrets from home launches November 2 with EntangledTeen, followed by several more novels on various Entangled imprints. She earned her MFA in Creative Writing from the New School, but has been writing books, plays and screenplays since she could practically hold a pencil.

Her first novel, SEA (Putnam), was a Gateway Readers Award Finalist & Northern California Book of the Year nominee, was a Summer 2010 Indie Next Pick and a Goodreads “Mover and Shaker”.

Twitter
a Rafflecopter giveaway
Posted by Kate Larkindale at 12:00 AM