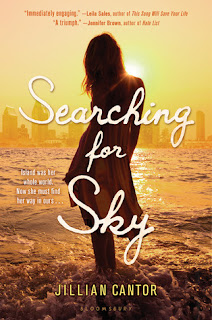 This is one of those books I really enjoyed while I was reading it, but the more I thought about it afterward, the more frustrated by it I got.

Sky and River have grown up on Island, a tropical paradise where every day had a series of chores and rituals and rules to shape it.  Then one day, River spots a boat and the pair are 'rescued'.

With someone who claims to be her grandmother, Sky must learn how to live in modern California.  And the grandmother refuses to let her see or even mention River.

The premise for this book is fantastic.  It's kind of the reverse of those survival stories where people are lost in the wilderness and forced to survive.  And the backstory about how Sky and River came to be on the island in the first place is pretty fascinating.

Yet for me, the book didn't work 100%.  Sky's grandmother didn't ring true to me, and neither did any of the other people surrounding Sky and trying to help her.  This is a girl whose whole life has been lived in seclusion, without any of the things those of us who live in the modern world take for granted.  Yet when she is brought into society, no one bothers to tell her the names for the things she's seeing or what they are used for.  She is allowed to go home with her grandmother without any kind of professional help with decoding the world she now finds herself in.

And what happens to River is a whole different story….

So while I really liked a lot of this book, I didn't believe it and that always leaves a sour taste in my mouth.

Sky and River have always lived on Island, the only world they've ever known. Until the day River spots a boat. Across Ocean, in a place called California, Sky is separated from River and forced to live with a grandmother she's just met. Here the rules for survival are different. People rely on strange things like cars and cell phones. They keep secrets from one another. And without River, nothing makes sense. Sky yearns for her old life where she was strong and capable, not lost and confused. She must find River so they can return to Island, but the truth behind how they ended up there in the first place will come as the biggest shock of all.
Posted by Kate Larkindale at 11:42 AM