As promised, here's the first in my series of posts about books I've loved.  I decided to start with the one that really knocked my socks of last year, Corey Ann Haydu's OCD Love Story. 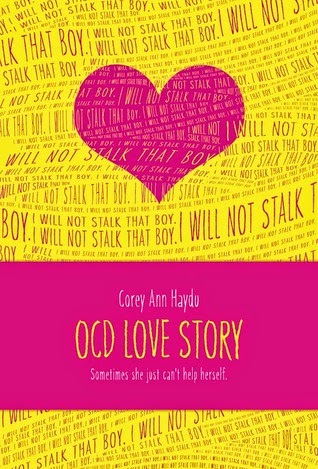 I read this on my phone and I usually only read on my phone while I'm on the bus.  While reading this book, I welcomed being stuck in traffic because I seriously couldn't put it down.  I even kept reading after I got off the bus, foregoing my paper books because I had to finish this one.

It's a really uncomfortable read.  Haydu so perfectly captures the mindset of someone suffering from OCD that even though as a reader you know what's happening isn't right, know that's it's all going to end badly, it all makes a twisted kind of sense.

It's a book that stuck with me for days after I read it.  It's raw and quirky and funny and sad all at the same time.

Here's the blurb in case my raving about it isn't enough for you to go rushing out to buy it….

When Bea meets Beck, she knows instantly that he’s her kind of crazy. Sweet, strong, kinda-messed-up Beck understands her like no one else can. He makes her feel almost normal. He makes her feel like she could fall in love again.But despite her feelings for Beck, Bea can’t stop thinking about someone else: a guy who is gorgeous and magnetic... and has no idea Bea even exists. But Bea knows a lot about him. She spends a lot of time watching him. She has a journal full of notes. Some might even say she’s obsessed.Bea tells herself she’s got it all under control. But this isn’t a choice, it’s a compulsion. The truth is, she’s breaking down...and she might end up breaking her own heart.
Posted by Kate Larkindale at 9:39 AM