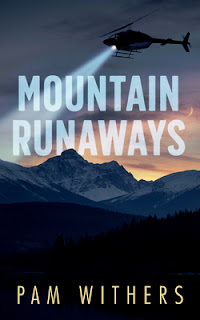 As anyone who knows me will be aware, I love books about siblings and their relationships.  Especially siblings who are forced to face challenging situations without any adult input.  So when I saw this book on NetGalley, I thought it was probably right up my alley.

It follows three siblings after their parents die in an avalanche just outside their front door.  The entire family are extremely experienced outdoorsmen, the parents having run a survival school from the family home.

Rather than face the possibility of being separated in foster homes, or the youngest, Aron, who is largely non-verbal, being placed in a facility, the three kids flee into the wilderness.  They are confident they have enough of a plan and enough knowledge to survive until Jon, the eldest, turns 18, despite it being mid-winter and having the ability to carry only a limited amount of supplies.

As you would expect in an outdoor adventure story like this, the path is not smooth for the trio.  Shortly after they leave home, Aron becomes ill and they are forced to stop for several days while he recovers.  And then Korka, the middle sibling, sprains her ankle and they are forced to hole up for even longer while she heals.  Supplies become short and they would starve if not for Aron's sudden resourcefulness in hunting hares.  A resourcefulness that reveals they are not alone in the woods...

I enjoyed this book, but really wanted the characters to struggle more.  They argue, as siblings do, but it never gets much beyond petty bickering.  None of the three seem to grow much as people through their ordeal, nor do they ever seem to get scared - even when challenging wolves or wildcats for meat they have caught.  And despite the amount of time and resource the mountain rescue team must put into finding them, there is little in the way of consequences for them once they emerge back into civilization.

This is a quick, easy read that doesn't leave much on an emotional impact.  If you're into survival stories and books that take place in the wilderness, then this one might be for you!

Thanks to NetGalley for letting me read this early.

Will their wilderness skills be enough to survive the dangerous Rocky Mountains?

First an avalanche in the Canadian Rockies kills their parents. Then Children’s Services threatens to separate them. That’s when the three Gunnarsson kids decide to run away into the mountains and fend for themselves until the oldest turns eighteen and becomes their legal guardian. Not many would dare. But Jon, Korka, and Aron’s parents ran a survival school.

Turns out their plan is full of holes. When food and equipment go missing, and illness and injury strike, things get scary. They’re even less prepared for encounters with dangerous animals and a sketchy woods dweller on their journey. On top of that, grief, cold, hunger, and sibling infighting threaten to tear them apart, and the search parties are closing in on them. Do the feisty three really have what it takes to survive?
Posted by Kate Larkindale at 9:00 AM