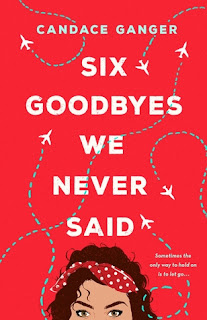 There is a lot to like about this book. Both the main characters are truly broken people- and for good reason. Their ways of dealing with their individual losses are very different, and I really appreciated this because everyone deals with things in their own ways.

I just wish the two character voices were more distinctive. Because they were both grieving for lost parents and dealing with complex mental health issues, it was difficult to know who we were following section to section. It got easier toward the end once we knew all the supporting characters and who was important in whose life, but early on, I became confused.

It was also difficult to actually like Naima. I feel like this was intentional, but it's difficult to get into a story when you really wish the MC would fall into a ditch so you didn't need to listen to her whining for a while.

That said, I think the portrayals of the various different coping mechanisms and quirks each of the characters had were very realistic. I also really liked that the adult characters around these broken people let them be themselves and find their own ways to deal with their various issues. They were all supportive and present and loving, but didn't go over the top in trying to 'cure' the kids in their care.

So while I didn't love this one, I did like aspects of it.

Thanks to NetGalley for giving me the chance to read it before release.

But don't just trust me.  Here's the blurb:

Two teens meet after tragedy and learn about love, loss, and letting go

Naima Rodriguez doesn’t want your patronizing sympathy as she grieves her father, her hero—a fallen Marine. She’ll hate you forever if you ask her to open up and remember him “as he was,” though that’s all her loving family wants her to do in order to manage her complex OCD and GAD. She’d rather everyone back the-eff off while she separates her Lucky Charms marshmallows into six, always six, Ziploc bags, while she avoids friends and people and living the life her father so desperately wanted for her.

Dew respectfully requests a little more time to process the sudden loss of his parents. It's causing an avalanche of secret anxieties, so he counts on his trusty voice recorder to convey the things he can’t otherwise say aloud. He could really use a friend to navigate a life swimming with pain and loss and all the lovely moments in between. And then he meets Naima and everything’s changed—just not in the way he, or she, expects.

Candace Ganger's Six Goodbyes We Never Said is no love story. If you ask Naima, it’s not even a like story. But it is a story about love and fear and how sometimes you need a little help to be brave enough to say goodbye.
Posted by Kate Larkindale at 12:30 AM