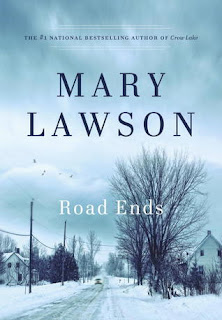 I have binge-read all of Mary Lawson's books over the last couple of weeks.  I read Crow Lake many years ago and it became one of my all-time favourite novels.  After re-reading it a couple of weeks ago, I decided to see if Mary Lawson had written anything else, and ordered her other two books, both of which I read over the weekend.

Road Ends is my least favourite of the three, but still a powerful and engaging read.  Like all Lawson's books, it is set in a remote Ontario town called Struan.  There are even cameos from a couple of characters from Crow Lake in there, which I enjoyed seeing.

The book is about a family with eight sons and one daughter.  The father is remote and busy, shut away in his study when he is home and leaving the raising of all these kids largely to his only daughter since his wife seems only to be interested in children while they are still babies.

So when Megan, at the age of 21, decides it's time to leave home, it's inevitable that things might start to go wrong.

The story is told from three points of view: Tom, the eldest son, Megan and Edward, the father.  Tom and Megan's sections are told in third person while Edward's are in first person, almost like a journal he's writing for himself.

Tom is home again at the age of 25, dealing with a tragedy that he feels at least partly responsible for.   He's shut himself off from the world, not speaking or engaging with anyone any more than he has to and keeps to a strict, unalterable routine to keep his world within the boundaries he can cope with.

Yet as things begin to spiral out of control at home, Tom finds himself having to deal with more and more and his carefully built walls begin to crumble, allowing the rest of the world to begin creeping in.

Meanwhile, Megan has moved to London which, after the smallness of Struan is something of a culture shock.  Yet, ever practical and pragmatic, she manages to find work she loves and build a life for herself.  She misses her family, but revels in not having to be responsible for them anymore.

Edward, locked in his study, is largely unaware of the chaos reigning outside the door.  The occasional rowdy fight between his sons drags him away from his reading and he emerges to yell at them, something he regrets afterward because it reminds him of his own father, a brutal man whose shadow he has never really managed to escape.

The emotional and physical isolation of these characters is almost painful to read.  But their eventual growth as they begin to dig themselves out from the holes they have been hiding in is worth the pain.

The ending was disappointing though.  And I think that's why it isn't my favourite of the three novels by this author.  The explanation for the mother's fading from the world didn't ring entirely true to me, and both Megan and Tom disappointed me.  They both had other choices they could have made in the situation, although I do sort of understand why they acted the way they did.  I just wished it could have been different.

But overall, this is another beautiful book by Mary Lawson that illustrates the harshness and isolation and the wild, untamed beauty of small communities in the North of Canada.

Mary Lawson’s beloved novels, Crow Lake and The Other Side of the Bridge, have delighted legions of readers around the world. The fictional, northern Ontario town of Struan, buried in the winter snows, is the vivid backdrop to her breathtaking new novel.

Roads End brings us a family unravelling in the aftermath of tragedy: Edward Cartwright, struggling to escape the legacy of a violent past; Emily, his wife, cloistered in her room with yet another new baby, increasingly unaware of events outside the bedroom door; Tom, their eldest son, twenty-five years old but home again, unable to come to terms with the death of a friend; and capable, formidable Megan, the sole daughter in a household of eight sons, who for years held the family together but has finally broken free and gone to England, to try to make a life of her own.

Roads End is Mary Lawson at her best. In this masterful, enthralling, tender novel, which ranges from the Ontario silver rush of the early 1900s to swinging London in the 1960s, she gently reveals the intricacies and anguish of family life, the push and pull of responsibility and individual desire, the way we can face tragedy, and in time, hope to start again.
Posted by Kate Larkindale at 11:27 AM