Books I've Read: As I Descended 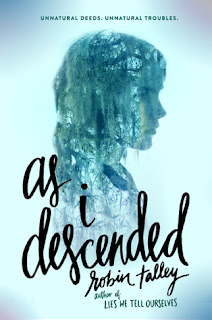 I have been excited about reading this book since I first heard about it.  I mean, a modern retelling of Macbeth with lesbians?  How much more up my alley could it get?  So I started reading this as soon as I found it in the library.

And I didn't love it as much as I thought I would.

Don't get me wrong.  I didn't hate it.  I actually enjoyed most of it.  But I found it really difficult to identify or care about any of the characters.  There's the couple at the center - Maria and Lily who are the Macbeth and Lady Macbeth of the piece. They're roommates at an exclusive boarding school.  Roommates and lovers, although they keep the lovers part a secret.  Lily is crippled after a car accident as a child and finds getting around difficult.  Maria is smart, but not top of her class, only second to top and she has been brought up by a Spanish nanny who taught her all about the spirit world.

About to graduate, Maria has her eyes and heart fixed on winning the Kingsley Prize which will allow her to go to Stanford with Lily.  Unfortunately, there is competition for the prize in the form of school queen bee, Delilah.

After consulting a Ouija board, Lily and Maria come up with a fiendish plan to get Delilah out of the running for the prize, but like most plans, this one doesn't go the way they hoped it would and soon the girls are knee deep in intrigue, secrets and blood.

And someone seems to have let loose the old school's ghosts as well.

I think I would have enjoyed this book more if it had stayed firmly in the real world.  The girls and their machinations, bitchiness and complete focus on getting their way would have been enough.  The ghosts and vague spiritual stuff didn't really add anything to the story.  In fact, it kind of muddied things a little in that you were never entirely sure if the girls were acting on their own, or as a result of ghostly possession.  And I think it would have been scarier without the ghosts.  The kind of blind ambition these girls demonstrate is terrifying enough on its own.

I didn't really like any of the characters in this book or feel any compassion toward any of them.  So it was difficult to care when they started dying and losing their minds/seeing malevolent spirits.  If you're not interested in ghosts or supernatural phenomenon, you might want to think twice about picking this one up.


Maria Lyon and Lily Boiten are their school’s ultimate power couple—even if no one knows it but them.

Only one thing stands between them and their perfect future: campus superstar Delilah Dufrey.

Golden child Delilah is a legend at the exclusive Acheron Academy, and the presumptive winner of the distinguished Cawdor Kingsley Prize. She runs the school, and if she chose, she could blow up Maria and Lily’s whole world with a pointed look, or a carefully placed word.

But what Delilah doesn’t know is that Lily and Maria are willing to do anything—absolutely anything—to make their dreams come true. And the first step is unseating Delilah for the Kingsley Prize. The full scholarship, awarded to Maria, will lock in her attendance at Stanford―and four more years in a shared dorm room with Lily.

Maria and Lily will stop at nothing to ensure their victory—including harnessing the dark power long rumored to be present on the former plantation that houses their school.

But when feuds turn to fatalities, and madness begins to blur the distinction between what’s real and what is imagined, the girls must decide where they draw the line.
Posted by Kate Larkindale at 9:38 AM